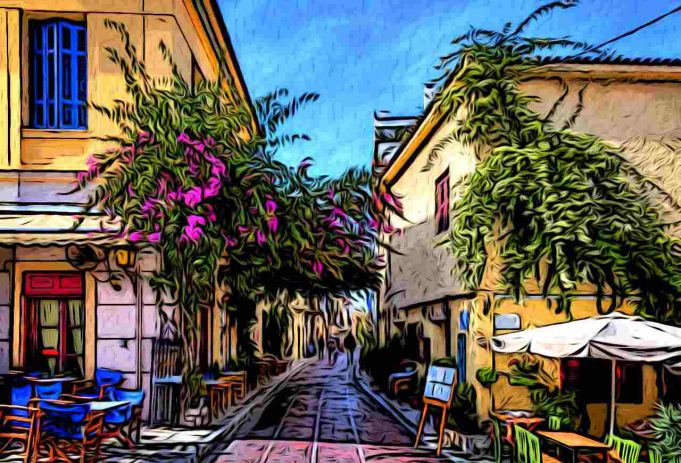 Doubtlessly, Plaka is one of the most unique regions in the capital, with its narrow and candid streets,outstanding buildings from the neoclassical tradition, cozy cafes, authentic tavernas, souvenir shops, and ancient sites in almost every corner. Hugging the base of the Acropolis, the area extends from Filomousson Square, down to Monastiraki.

Centuries of exposure to rain & wind has exposed the outer walls of St. Nicholas Ragavas and the columns of the ancient temple as well, on which the 9th-century church is built. This small basilica makes an interesting juxtaposition with the sliver of the Acropolis visible behind it. The rich interior includes a bell that rungs on the Greek Independence Day.

Up the stairs next to the church of St. Nicholas Ragavas, here comes Anafiotika. Squeezing between the neighbourhood’s white-washed dwellings is like exploring a Cycladic village. Indeed, this old quarter was founded by workmen from the island of Anafi. The legends says that the settlers became so homesick of their island that they chose to build their dwellings after the Cycladic architectural style in order to feel closer to their homeland.

3The Choragic Monument of Lysikrates

The Monument of Lysicrates sits amid an excavated square on the edge of Plaka, almost perpendicular to Hadrian’s Arch and directly below the Acropolis cliff, opposite the church of Ayia Aikaterini. Lysikrates was a wealthy patron of theatrical plays performed in the theater of Dionysus, and the street was once filled with similar monuments of patranoge. The architecture tends more towards the odd-looking than the comely: a podium topped by a solid tower with embedded Corinthian columns. Lord Byron visited the place as well.

Completed in 1958, the access road from Dionysiou Areopagitou to the Acropolis gate ingeniously applied modern technology to recreate an ancient craft, thanks to the architect Dimitris Pikionis. He instructed the masons to choose stones of different shapes, sizes, and colour and also did not allow the ground to be levelled so that the builders would have to adapt their work to the terrain. As a result, few visitors to the Acropolis today manage to think the road separately and realise that it is not ancient but was laid just a few decades ago.

The oldest house in Athens presents a completely different picture of its architectural traditions long before the grand neoclassical design of the modern state’s capital. Still, the beautifully restored 16th-century residence is typical of the Byzantine and post-Byzantine style preserved in the city’s churches, right down to the arched portico around the inner courtyard. It is now operates as a museum.

The Roman Agora, built between 19-11 BC as an expansion of the ancient Agora to the East from donations of Julius Caesar and Augustus, cannot go unnoticeable. There are many interesting structures and buildings in the archaeological site, like the Fethiye Mosque, the Agoranomion, and the Tower of the Winds, a 12-meter-tall clocktower that is dubbed as the first ever meteorological station. The tower served as a sundial, a waterclock, and a wind vane. It’s designer is the astronomer Andronikos of Cyrrhos.

The Museum of Greek Folk Musical Instruments that holds the collection of musicologist Foivos Anogiannakis, Frissiras Museum with contemporary European art, the Jewish Museum with an interesting collection of rare books, textiles, domestic and religious artifacts, the Athens University Museum with many transcripts and old photos, the Museum of Pavlos and Alexandra Kanellopoulou, with archaeological finds and artworks from the prehistoric period up until nowadays, and the Children’s Museum with art created by children are prominent museums in the are.

In Elaias Gi (Adrianou 122) and Evonon (Adrianou 124), you can find a big selection of good quality Greek olive oil. If you want to purchase ouzo, then on Adrianou 120 you will find the shop of Mr. Agelos, who has a huge variety of different brands of ouzo. In Byzantino, they make their own gold jewellery. The Filomouson Etairias Square, or just Platia, hosts many traditional cafes & restaurants. Saita Taverna (Kydathinaion 21), Vyzantino Restaurant (Kydathinaion 18), I Palia Taverna tou Psarra – The Old Tavern of Psaras (Erotokritou & Erechtheos 16), To Kafeneio (Epicharmou 1), and Scholarhio Ouzeri – Kouklis (Tripodon 14) are good choices.