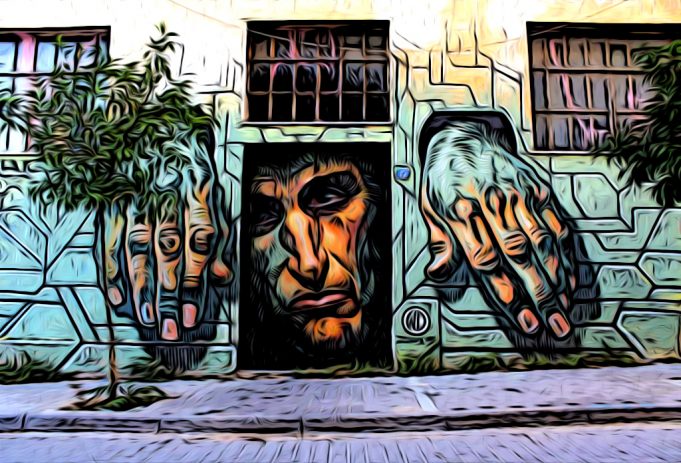 The neighborhood of Exarchia lies at the center of Athens. It is near the Victoria, Panepistimio, and Omonia stations. Omonia Station is the closest of these three. Exarchia has a vibrant culture, lively squares, and a rich history. Famed for the demonstrations against government policies in recent years, the area is a popular attraction for locals and internationals.

Athens is famous for its ancient history, and its Hellenistic fabric. Exarchia, on the other hand, showcases the other face of the city. The modern urban life with a vivid nightlife is the characteristic of Exarchia.

The Location of Exarchia

Exarchia is located between Lycabettus Hill and Pedion tou Areos. Pedion tou Areos is a very large park adding green to the beautiful scenery of the district. The most popular area of the city, Syntagma, is only a few minutes away from Exarchia. Exarchia also borders the upscale neighborhood of Kolonaki.

The History of Exarchia

The Exarchia neighborhood in Athens was formerly populated by Cycladic migrants. The inhabitant profile of the district changed after several departments of the University of Athens had relocated to the area. After the arrival of university departments, the area started to host students and academics.

The student population of the neighborhood played an important part in the 1973 uprising. The riot against the dictatorship of Greece resulted in overthrowing the junta. However, the series of events against the government labeled Exarchia with a bad reputation. The area came to be known as a space of restlessness and upheaval. Exarchia still acts as a platform where different political and philosophical ideas clash. Yet, instead of violence, arts and performance burst out of the neighborhood. Exarchia constantly hosts festivals, performances, concerts, and other artistic events. The number of visitors that spend time in Exarchia increases every year. As one of the most impressive parts of the city, Exarchia finally starts to get the attention it deserves.

The Kallidromiou Street of Exarchia

Kallidromiou is arguably the center and soul of Exarchia. The street is lined with mulberry trees. Located on the western side of Lycabettus Hill, Kallidramiou is originally named after the hill above Thermopylae. Due to an error in the past, the name of the street became Kallidramiou instead of Kallidromou. The most famous attraction of the street is the laiki it hosts on Saturdays. Athens is dotted with farmers’ markets every day of the week. Yet, Kallidramiou’s laiki is traditionally a meeting place where haggling is a custom. Both locals and tourists enjoy the weekly event while doing their shopping.

The National Technical University of Athens

The first sparks of the 1973 uprising were lit at The National Technical University of Athens. The university is still regarded as the origin of the riots. The two-centuries-old building and academic activities of the university are also attractions, but the main cause of popularity is its history. The commemoration events of 1973 take place every November at the university campus. Thousands of Greeks visit the representative sculpture made by Memos Makris. The sculpture is a young person’s bodiless head rolling which is in memoriam of the victims. The university receives visitors throughout the year. The day of commemoration is November 17th.

Things to Do in Athens in Winter