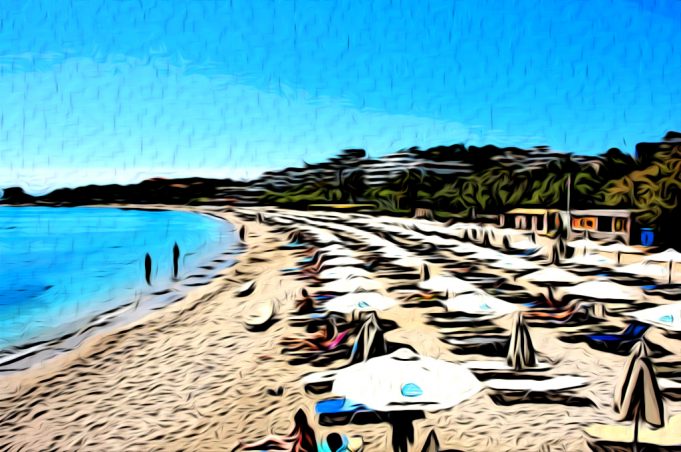 The beaches in Athens exhibits crystal clear waters of the Aegean and sand-fringed shorelines that are easily accessible by public transport. Literally, they bring the Greek Islands home! Indeed, Greater Athens features the longest coastline of any European capital. Furthermore, Athens’ beaches consistently awarded Blue Flag that approves their high standards of service and security. So, why not crowning your history-based trip to Athens with a creme-de-la-creme beach vacation for yourself?

Lying on the boundary between the Palio Faliro and Alimos districts, the closest beach to the city center of Athens is Edem. Indeed, the beach is easy to reach from downtown via tram (Edem stop). The beach itself is well-organized but gets crowded as it’s a very suburban area. The long seafront promenade leads to two smaller beaches and a large chessboard built into the pavement provides you with activities to accompany swimming.

Amid its forest like flora on a pine tree covered peninsula, this organised and well-kept beach is found in the well-known lush & green surroundings of Vouliagmeni. There are several sandy stretches where one can swim in shallow and crystal waters. The most popular is Megalo Kavouri near to the tip of the western coast. Sunbeds and umbrella stands with mobile phone chargers are available to make the experience as comfortable as ever. Boat tours and sunbeds are also present for rent. Take the metro to Elliniko station and from there hop on the 122 bus to reach the beach.

Gratify yourself in Astir Beach Club at Vouliagmeni

The ultimate luxury beach experience, Astir Vouliagmeni is considered one of the top spots for a summer swim in Athens. It is set on 300 metres of coastline in the crystal blue waters of the exclusive Laimos peninsula. The entrance fee is 18 euros during the week and 28 euros on the weekends per adult. As a result, you may expect full scale facilities: Wi-fi throughout the beach, small designer boutiques, massage therapists, day spa, sport courts, yoga on site, and attentive beachside waiter service to comfortable sun lounges. Bungalows can be hired in advance as well. The adjacent restaurant is open until midnight.

Why not tasting the joy of swimming in a lake?: Akti Vouliagmenis Beach

The waters of the lake are fed up by saltwater via underground currents run through the mountain. As a result, Akti Vouliagmenis comes into form as an ideal beach, especally if you like being physically active. Offering a full range of amenities from first aid station, to a kid’s playground, tennis & volleyball courts, elegant beach chairs and umbrellas plus free Wi-Fi. In the lake, the waters are often slightly warmer than in the sea. Generally peaceful and quiet, it is a good option if you want easy access to plenty of amenities. Tavernas nearby worth to stay until late to enjoy serene waters surrounded by well-lit rocks with the company of a drink.

One of the most popular spots to swim in Athens itself located in the southern suburb of Voula. The sandy beach offers a range of services and has high-quality sunbeds at reasonable prices. Entrance during weekdays is 4 euros per head and 5 euros over the weekend. The beach is also easily accessible via public transport: either take the metro to Elliniko station and then hop on the 122 bus or take the tram until the stop “Asklipio Voulas”.

One of the largest beach clubs on the Attica riviera, the Varkiza Resort offers a selection of restaurants and facilities that make it a comfortable family day at the beach. However, during the weekdays there is a 5-euro entrance fee per head including an umbrella & sun loungers. On the weekends, the entrance fee becomes 6 euros and umbrellas come with 5 euros extra. Swimming after 7pm is free. A beachside souvlaki eatery, pizzeria and sushi bar accompanies sport courts and playgrounds. Keep in mind that it’s 35km away from Athens downtown, but bus no. 122 and 171 that are taking off from Elliniko metro station pass by there.

Hard Rock Athens Offers Quality In Its Own Kind!

Why Not Eat It “High” While Soaring Over Athens?

How About Tasting Greek Delicacies In Michelin Style?