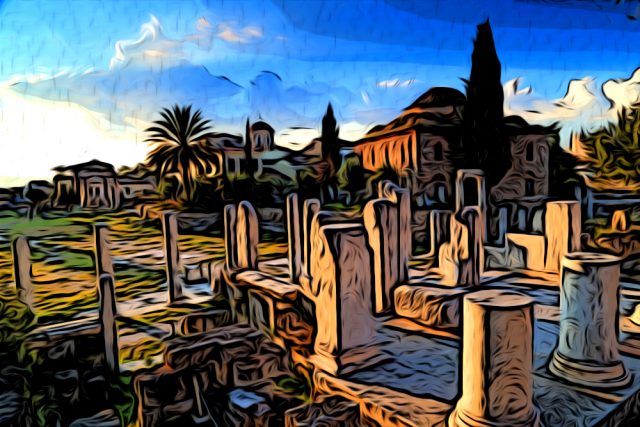 Agoras in Ancient Greece were public squares where the inhabitants would meet to discuss politics and daily life matters. It is also where elections, religious processions, athletic competitions and various festivities were held. Furthermore, they were also important commercial spaces with vendors and considered as the heart of the city, like their modern equivalent squares. The great thinkers Sophocles, Socrates, Protagoras and many others would meet in there. It represented civil ideas like freedom, justice, equality, prudent communication and social conscience to some extent in fundamental basis. Today, Ancient Agora in Athens stands as a hardcore witness of time. Many artifacts and remnants from different eras are on display.

The Stoa of Attalos was a spot for Athenians to meet and converse. It was a Hellenistic version of a mall, with 42 shop spaces over two levels. The restoration long after its plunder took place between 1953 – 1956, and over 160,000 items dating from Neolithic times to the 19th century have been unearthed. The upper floor of the stoa hosts a permanent exhibition of sculptures & busts excavated on the site, representing Athenian art from the late Classical, Hellenistic and Roman periods.

In the Agora museum on the lower level, artifacts reach back to the stone age, including sculptural pediments from the frieze above the Temple of Hephaestus.. The site flourished for several centuries, reaching its highest in the 5th century BCE, during the Classical era of Athens. Indeed, Mycenaean civilization, Athenian Golden Age, Roman culture and Byzantine impressions are visible throughout the complex.

Built in the 11th century and underwent changes repeatedly throughout the centuries, the church of the Holy Apostles was restored to its original form from 1954 in 1956. Nonetheless, it is the only structure in the site apart from the Temple of Hephaestus, to remain intact since its foundation.

2An Athenian touch to the Byzantine Grounds: Church of the Holy Apostles

It’s a pioneer of churches built in the Byzantine period in the Athenian style, with its signature mark eight-sided dome and a cross-shaped floor plan which is surrounded by apses on the four sides and a narthex on the west side. Four columns support the dome and the altar. The floor were originally made of marble.

3A Stricking Beauty: Temple of Hephaestus

Among the agora’s many temples, alters and other shrines, the temple of Hephaestus shines as one of the best preserved of its type in whole Greece. Indeed, it’s the most visible structure in the Ancient Agora of Athens. Resembling Parthenon in many ways including the dates of construction (circa. 450 – 415 BC), it’s in Doric Style with traditional metopes as adornments. Entering inside is prohibited but you can observe enough from the outside. The inner set of columns over the porch support a continuous but not wrapping Ionic Freeze. It is embellished with high relief sculptures depicting Centaurs and Lapyths during a fight.

4How to get to the place?

The Ancient Agora of Athens is right in the of the historic quarter of Athens, so easily accessible by Metro. Use Line 1 and get off at either Monastiraki or Thesion, both in walking distance.