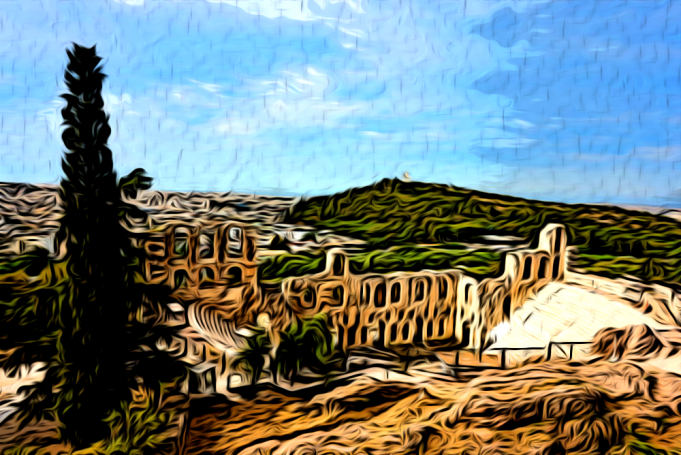 The historic capital of Greece can be seen in one day, so you shouldn’t skip it in favor of the Greek Islands. From the famous Acropolis to Monastiraki Sq, here are the top attractions that can be covered in just a day.

Built around 2,500 years ago, and started life as a temple, the Acropolis consists of several buildings. As you can guess from the photos, the most outstanding part is the well-known Parthenon, which is the building in the middle with pillars. Still, the whole ancient site worths your time, from the open-air auditorium to the inner temples. Take your time to admire the ruins and the views of Athens. If you’re passionate about history and archaeology, stop by the Acropolis Museum as well.

The Temple of Zeus is one of the biggest ancient temples. Although only 15 Corinthian-style columns remain standing today out of 104, the temple is pretty impressive. The construction of the temple started in the 6th century BC and it was finished only in the 2nd century AD under the reign of Hadrian. The Arch of Hadrian was also built after him, serving as a gateway to the temple.

Although Athens itself is one giant living outdoor museum, one that stood out was the National Archaeological Museum as it’s the largest museum in Greece, and the most popular of all of Athens’ museums. The Antikythera mechanism, which is the oldest known mechanical computer, is among many incredible items on display ranging from 2000-year-old statues to frescoes.

Surrounded by beautiful yellow and orange Greek houses, one day in Athens should include this ancient government complex. The Roman Forum was the public center of daily life in Rome: The place where orations, elections, and gladiator fights were held. Today, the building still manages to impress despite the ruined columns.

Just a short walk away from the Roman Forum is the Monastiraki Square where you can admire some incredible views of the Acropolis. Apart from the views, the Monastiraki Square is well known for the plethora of souvenir shops. Most of the time, live bands are singing Greek music. The square is bustling with noise, energy, and movement. It’s the perfect place to feel the vibe during your one day in Athens.

This pleasant and charming neighborhood is well-suited for stopping at lunchtime. Traditional Greek food is served in great variety at lots of restaurants. You can find local stores as well, with beautiful clothes, accessories, and other small souvenirs to make your one day in Athens perpetual. The Plaka area is also the historic center of Athens, filled with winding back streets, steep staircases, taverns, cafes, and restaurants. In the embrace of the Acropolis’ cooling shadow, many crowds drink frappe, chit-chat, or sing happily in there.

The best view of Athens is one that includes the Acropolis. For that, you need to head up Mount Lycabettus. This is the highest point in Athens at 277 meters above sea level. There is a funicular that will whisk you to the top in no time at all if you prefer quick access. From the surrounding mountains to the Aegean sea and the urban plains in between, the views from the top are mesmerizing. You may immortalize your one day in Athens by taking a panoramic photo of the sunset.

Don’t Confine Yourself To Acropole: 8 Destinations For Day Trips From Athens

Where to Stay in Athens: A Guide to Athens Neighborhoods